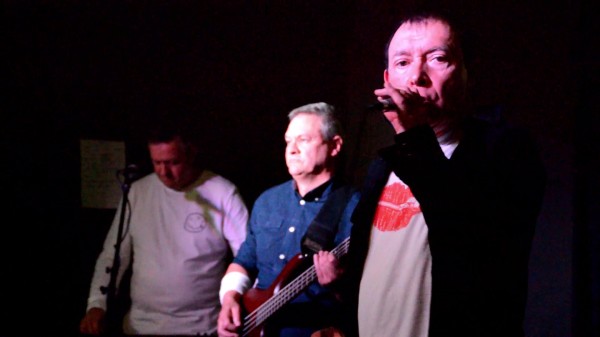 We are pleased to announce that we have original vinyl copies of our first single “Time Bandits” for sale.

The price is £5.00 plus £1.50 postage (UK). Overseas customers please enquire for postage details.

The gig at the Hard Rock Café on Friday the thirteenth of April was to celebrate the life of drummer Davie Halley, who died back in December 2017.

Organised by Shock City Productions, the gig was to celebrate the life of Davie, featuring many of the bands that Davie had worked with.

The MC for the night was Glasgow rock DJ legend Tom Russell, “the Godfather of Rock”, who segued each band together with a short introduction and background of their involvement with Davie.

First on stage were Arthur Montford and the Sports Jackets, namely Tam Gallagher and Tam Watson (both with Rose Room), Allan McNeill and Desi Osborne (later to play with Passionate Friends). The guys did 3 numbers Bob Marley’s Stir It Up, Driver’s Seat by Sniff ‘n’ the Tears and finally Bowie’s Rebel Rebel. That got the show off to a great start and set the tone for the night ahead.

Next on were Rattlesnake Tattoo, who did an excellent set, good old fashioned hard rock. Led by Jeff Jeffrey (previously worked with members of Simple Minds, Hue & Cry, Del Amitri and Heavy Pettin), he was equally supported by Ronnie Garrity on bass guitar (previously with the Heavy Metal Kids, Quireboys and Eric Bell’s Thin Lizzy)and Brian Gatens on drums. Jeff was acquainted with Big Davie through their work with the band Glasgow. The crowd really appreciated the short snappy set. 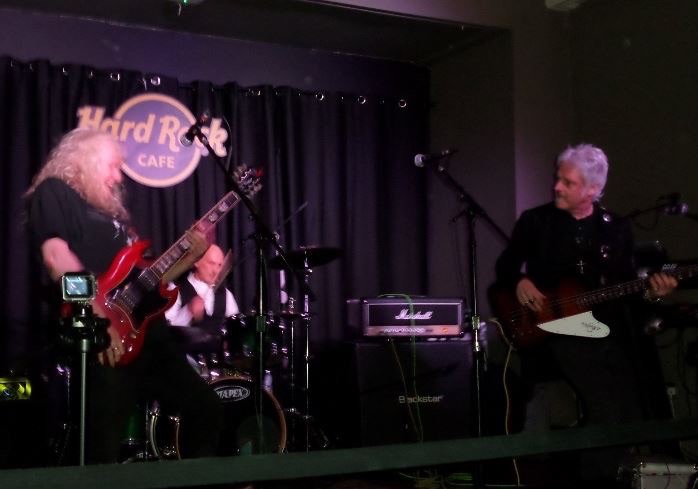 Passionate Friends then took the stage after the introduction from Tom Russell. “This band played at Ibrox with Rod Stewart, and where Rod got the Home dressing room the boys were given the cleaners cupboard!” 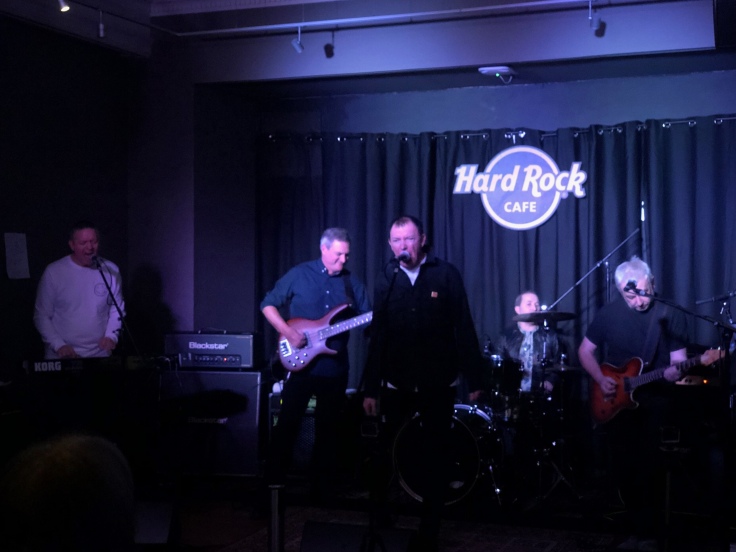 Along with the 3 McNeill brothers John, (Jonzip from the Zips), Malky and Allan, and Tom Watson (guitarist with Rose Room), the band were joined on drums by Desi Osborne, previously with Scheme. They played 5 original numbers – Wake Up Shake Up, No Hard Feelings, First Time, Turn Away and lastly the song that had been played during Davie’s funeral service – Time Bandits.

Then it was onto Chris Glen. Previously the bass player with SAHB, the Sensational Alex Harvey Band, Chris and his band members treated us to a variety of rock classics, much to the delight of the 150+ audience. The two tunes which stood out for me were the SAHB classics Framed and Delilah. The band were also joined on keyboard by Stuart Clyde, who had previously played with Davie in the bands Glasgow and Café Jacques. Another previous Café Jacques member was vocalist Chris Thomson.

The final band of the evening were Eddie, Archie and Barrsy – 3 of Davie’s mates who put together a great set of classic rock tunes, much to the delight of the crowd.

Davie’s brother Rick took the stage to thank the friends, family and guests for honouring Davie in such a fashion  – all in all a great hard rock night was had by all.

When the band sadly lost Davie the drummer last December the last thing on our mind was reforming the band and playing live again.

But that all changed when we were approached by the organisers of a gig to celebrate Davie’s life.

So the band got together and started rehearsals in March this year. We asked Desi Osborne to take Davie’s place which he gladly accepted. Desi has had a great career in drumming notably with the popular Glasgow band Scheme. Desi has also been a friend of the band for many years and is familiar with the style and the music. 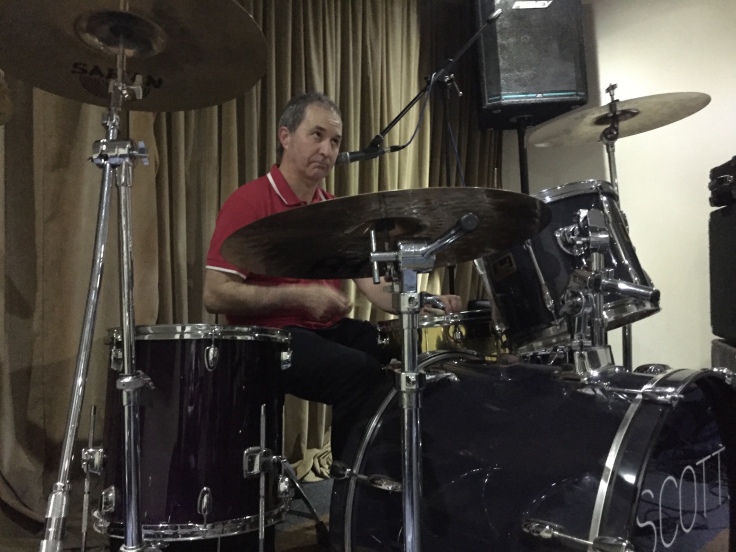 The band will take the stage at the Hard Rock Cafe Glasgow on Friday 13th April to perform a short set of their own numbers – Wake Up/Shake Up, No Hard Feelings, First Time, Turn Away and Time Bandits. Other bands and musicians from Davie’s music career will also contribute on the night. Tickets for HardRockCafe

Back in December 1983, Passionate Friends had the absolute honour of acting as the support band to the Police – in St Austell, Coliseum and the NEC in Birmingham

We first knew we had the gigs when our  manager Harvey Goldsmith, who was promoting the Synchronicity tour, saw an opportunity to replace China Crisis.

We had been filming the “Time to Think” educational film for STV, when Harvey’s assistant Chris Cooke turned up at Nite Moves in Glasgow with the news. That night Dec 11th 1983, the Police were playing at the Apollo in Glasgow. We were on the guest list and we were seated in a box above the stage, alongside Simple Minds. I remember on that night we were able to smuggle in a young lady, who had interviewed the band earlier in the day for a fanzine.

Roll on a few days, and the band were on the road to perform at the first gig on Dec 17th at the Coliseum in St Austell, Cornwall.

We had been due to be provided new outfits by our dresser, Jo Lewis, but an unfortunate event had happened earlier in the day in London. 6 people were killed, and 90 injured, when an IRA bomb blew up outside Harrods store. This meant that Jo had been held up by all the traffic disruption. Jo eventually made it down to St Austell with minutes to spare, and we were promptly attired in the best of Katherine Hamnett designer outfits. We were housed in a portacabin, beside the 3 backing singers. The roadies had marked their mike stands “Black – And – Decker”.
Then before you knew it we were out on stage to a packed St Austell Coliseum hall. Like any support band will tell you, it can be very difficult grabbing the audience attention when all they want is the main act – but we held our own and got through the set to a great reaction from the crowd. My main memory of the gig was cuddly toys and jelly babies been thrown onto the stage – not for us, but the Police.
We watched the Police from the main hall, drinking Guinness (supplied by the gig sponsor) and from the side of the stage, where Stuart Copeland’s work rate was immense – with a wide array of drums and a drum machine. We shook hands with them as they ran off the stage, and quickly whisked back home to London (presumably).
We stayed near St Austell, enjoying next day’s severe winter weather before getting ready for the next night’s gig to a new audience.
Then we headed back to London. We were on the guest list for the Billy Connolly gig in London (we shared the same manager). We went backstage with Billy and he did an impromptu performance for us while we quaffed his rider!
Next day we headed north the the National Exhibition Centre in Birmingham. A massive venue, we had to get in early enough to avoid the vast crowd of Police fans.
Sting and The roadies were carrying out the sound check “Ghost Riders in the Sky”. Sting came over to us an wished us good luck for the night. I can’t remember when Andy Summers showed up but Stuart Copeland turned up in a large American car, driving it right into the loading area at the back of the stage.
My recollection is that we went out to a crowd of 20,000 Police fans, but somebody will be able to confirm the correct attendance. We played the same set as we had in St Austell. It all went by in a flash and before you knew it we were back out there enjoying the show with the rest of the fans.
Our time on stage with the Police had come to an end.

p.s. I found this bootleg audio of the St Austell gig on YouTube – classy!